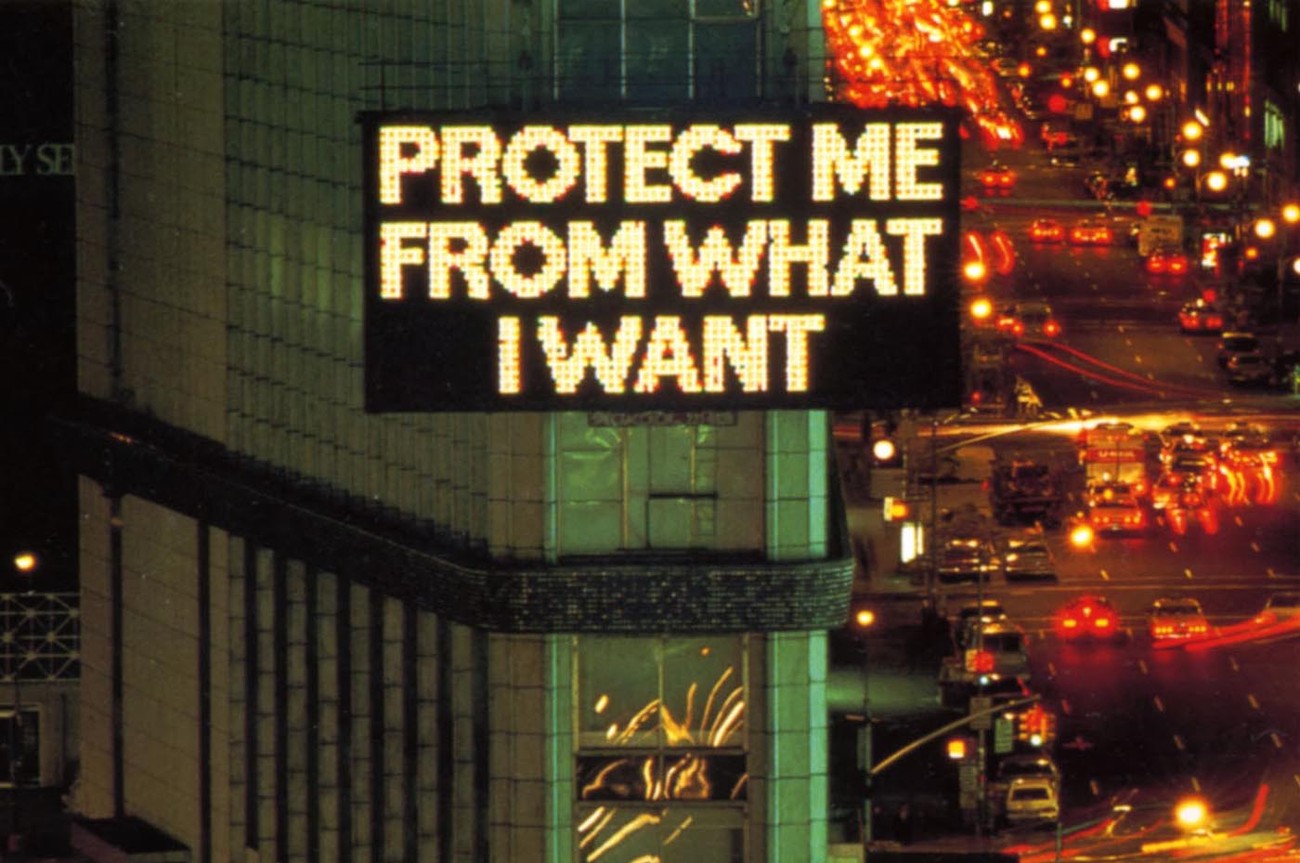 I remember being drawn to a photograph of an advertising display in Times Square, New York displaying the words ‘Protect me from what I want’ by the conceptual artist Jenny Hozler a few years ago. I laughed at the irony of buying it from the gift shop of the V&A, where I had seen it as part of their Postmodernism exhibition. Han’s book opens with the same quote from Holzer, and investigates another case of philosophy playing catch-up with art. The question being posed in his book is a familiar one: why is a system that pre-empts and provides so much of my wants so dangerous?

The big question being asked by Han is: why do people in neoliberal turn their aggressions towards themselves rather than against the system when they are unable to live up to its ideals? Han argues that people tend to feel shame at the prospect of not having achieved what they are constantly told they have the potential to become. Against the evident contradictions of society, people no longer see themselves as subjects, but as projects reinventing themselves fit society. Han calls this the ‘crisis of freedom’ where the idea that we can do something creates ‘manifold forms of compulsion’ (pg.2).

Han is really insightful when he questions the extend to which people are free under neoliberalism. He is able to put into words something that I have struggled to come to terms with for a long time:

Do we really want to be free? Didn’t we invent God so we wouldn’t have to be free? Before God we are all debtors: guilty. But debt–guilt–destroys freedom…Free from debt–that is, wholly free–we would have to act. Perhaps we run up debts perpetually so we won’t need to do so–that is, we won’t need to be free, or responsible. (pg.7)

Taking on huge debts, especially in the forms of student loans and mortgages are essential sacrifices for gaining social mobility under neoliberalism. You can have whatever you want on a credit card, so why aren’t you getting what you want?

Han argues that freedoms are sacrificed under neoliberalism to revive a capitalist God. A God that demands ‘transparency’ from those it watches over. Han argues that ‘data’ is not offered to this God by force, but out of an ‘inner need’ to conform to society. Han argues that total transparency has the effect of producing total conformity: ‘it is as if everyone were watching over everyone else —even before intelligence agencies or secret services have stepped in to supervise and steer’ (pg.10).

Devotion to this God is practiced using the ‘subjectivation-apparatus’ of the smartphone, which Han argues acts a like a rosary serving the purposes of self-monitoring and self-control:

Like is the digital Amen. When we click Like, we are bowing down to the order to domination. The smartphone is not just an effective surveillance apparatus; it is also a mobile confessional. (pg.12)

Han argues that power takes on a more permissive liberal appearance, attempting to seduce and stimulate. More compelling than the older power that threatens and imposes it replaces. Imagine the friendly female voices of Google Home, Apple’s Siri or Amazon’s Alexa. Han suggests that under neoliberalism, power takes on a more subtle form than Foucault had suggests in his later work on the technologies of power and the self. The later lectures had focussed on an ethics of the self which Foucalt had explored as way of out the technologies of domination and power. Han argues that Foucault’s blind-spot was that neoliberalism would claim the ‘technologies of the self’ for its own purposes: ‘self-optimisation and submission, freedom and exploitation, fall into one.’ Self-optimisation only serves to suit the system by creating compulsions to achieve more and more.

Han draws inspiration from Deleuze’s essay on the societies of control, which made a similar line of argument. This essay was my gateway drug into world of Deleuze and Guattari. I never managed to crack the image of the snake and the mole that Deleuze uses to compare disciplinary and control societies. I assumed it was one of those French things that got lost in translation, but Han shows how significant that metaphor is in the essay. The snake represents the animal of neoliberal societies, whilst the mole is the animal of disciplinary societies. This much Deleuze had made clear, but Han shows how moles move in confined spaces, whilst snakes are able to produce space by its own movement. The mole is a labourer —a subjugated subject with restricted movements, whilst the snake is an entrepreneur, a project that creates the space through which it steers. Read with the chapter on smooth and striated spaces in A Thousand Plateaus, this explanation suddenly makes a lot of sense.

Han argues that neoliberalism has sparked new kind of interest in emotions. Han starts by delineating some differences between emotions, feelings and affect. Briefly, Han argues that feelings are not intentional, they are temporal and objective. Whilst emotions are performative and subjective, affects on the other hand, are eruptive and subjective. It’s worth pointing out here that feelings come from higher-level interpretations of our lower-level emotions, this not entirely made clear in the explanation. Because emotions are short-lived, dynamic and situated, it can be exploited by something like consumer capitalism for generating more needs and desires. This is clearly a nod to Anti-Oedipus. Han argues that emotions have been deployed by neoliberalism to bring about more productivity and achievement. His target is the rise of emotional management in corporations, where managers have begun to resemble motivational coaches, leaving behind the principles of rational management that tried to do away with emotions:

Emotions are steered by the lambic system, which is also where the drives are seated. They form the pre-reflexive, half-conscious, physico-instinctual level of action that escapes full awareness. Neoliberal psychopolitics seizes on in order to influence actions on this pre-reflexive level. By way of emotion, it manages to cut and operate deep inside. As such, emotion affords a highly efficient medium for psychoplitically steering the integral person, the person as a whole. (pg.48)

Han’s core argument is that neoliberalism has begun to read and analyse our conscious and unconscious thoughts through the use of Big Data. He makes parallels with the neoliberal belief in big data with the emergence of statistics during the Enlightenment. Whist statistics was a form of objective data, Han argues that Big Data has become a form of ‘digital totalitarianism.’ Instead of reason, there is the mere fetishisation and sexualisation of data. The rise of self-quantification is used to illustrate this point, but on on a broader note, these are tendencies that can be noticed amongst the techbro crowd.

Han argues that the ‘quantified self’ is not based on an ethics of living well, but a technology for self-monitoring: ‘a self-illuminating, self-surveilling subject, it bears its own, internal panopticon within’ (pg.61). Big Data, Han argues, brings to light what he calls the digital unconscious: patterns that occur collectively within society, but remain unaware to individuals. This is where Big Brother and Big Business merge, commerce and the surveillance state have similar interests.

Han final few chapters are where I felt like the argument could have been given a bit more length. Han’s analysis is very illuminating, but we are left with not much to go on. Yes, big data will never create new concepts, it will only discover correlations within the system. Yes, it can only calculate average values. But ending with the argument that we need to ‘de-psychologise’ so that a new mode of living can emerge felt a bit abrupt, maybe Han will fill us in his next book.

There are some hints about what this outside may look like in the closing chapter entitled ‘idiotism’ in reference to the role of the idiot philosopher that Deleuze talks about in ‘What is Philosophy?’ Han argues that we need ‘idiotism’ in an environment of ‘impulsive and coercive communication.’ Idiotism is contrasted with intelligence, which can only follow the logic of a given system. The idiot is argued to inhabit an ‘immemorial outside which escapes communication and networking’ (pg.83). Instead of the horizontal plane of networked connections, Han argues that the idiot finds higher forms of agreement, able to receive broadcasts from the future, abandoning the horizontal plane of intelligence. Han argues that idiot gains access to a plane that is de-subectivized and de-psychologised leading to immanence:

Pure immanence is the void, which can neither be psychologised nor subjectivized. Immanent life is lighter and richer— indeed, freer —for such emptiness.

There is a really good review of the book at the Guardian, and this one at the LARB of his earlier book, The Burnout Society.